On the Pulse of the Times: EuroCIS Offers Exhibitors and Visitors Added Services via “iBeacons”

The red-hot topic, iBeacons, is not only being seized by exhibitors for their trade fair stands 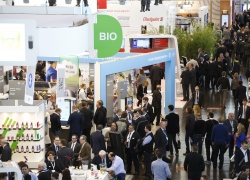 EuroCIS, the leading trade fair for retail technology, which takes place from 24 to 26 February 2015 in Düsseldorf, is already able to report a record. A good two months before the event, already 8,966 net square metres have been booked – this is 29% more than for the previous event (2013: 6,912 m2). This means that EuroCIS 2015 will be the largest in its history as a stand-alone event.

266 exhibitors from 21 countries are expected to be participating when the trade fair opens its doors in February. First and foremost, exhibitors from the Netherlands, Italy, Great Britain, Spain, Asia and Germany have booked more space. The high demand reflects the relevance of this platform – even as part of the world’s leading retail trade fair, EuroShop 2014, EuroCIS reported top results, with 433 exhibitors on 15,221 m2.

One major factor behind EuroCIS’ impressive success story is the fact that the event always orients itself to the developments and needs of the retail scene. Extraordinary in 2015: the red-hot topic, iBeacons, is not only being seized by exhibitors for their trade fair stands – EuroCIS itself is the very first Messe Düsseldorf event that is offering exhibitors and visitors additional services via its own iBeacons during the trade fair.

In other words, while iBeacons are increasingly being tested in retail locations for relaying targeted messages regarding product information and special offers at the POS, or for steering customers’ movements, EuroCIS is using the new technology during the trade fair to provide their exhibitors and visitors with valuable information about the event, as well as exclusive coupon promotions to enhance the experience of their stay in Düsseldorf. Moreover, exclusive information about special events will be made available. The key to these benefits will be the free EuroCIS app, which is already available free of charge from the App Store and Google Play.

Success is no coincidence: Business Analytics in retail

Business Analytics - Collect and analyze data and use the knowledge from it profitably. With the right systems, every retailer can do that.

Interactive and autonomous: Robotics and virtual systems for stationary retail

Robots and virtual systems have arrived in retail. Exhibitors and visitors of EuroCIS explain the role they play there.