Carried along on the wave 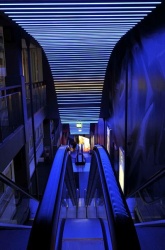 The fashion brand Esprit attracts its customers into the more than 640 branches world-wide not only with the help of its appealing range of goods, but always also with an attractive store design and a stimulating lighting solution full of contrasts. This also applies to the Esprit store in the Drottninggatan pedestrian zone in Stockholm. Here the way into the store is already designed as an experience. A spectacular LED light wave with emotional scene setting draws the customers into the third floor of a department store in which Esprit presents itself.

The LED light wave, with variable colour appearance was conceived by the luminaire producer Ansorg, Mülheim an der Ruhr, in cooperation with Vossloh-Schwabe Optoelectronic, Kamp-Lintfort. In this unique project, the difficult positioning of the Esprit store on the third floor, on the one hand, and the separate, direct escalator access, on the other hand, proved challenging. For Ansorg, the task consisted in the design of a lighting element that radiates an appealing effect and hence animates the customers to take the escalator. The LED light wave manages both – and does it in an impressive way. The spectacular and emotional play of colour entices the customers and shows them the way upwards and hence into the experience world of Esprit.

Each of the three control groups of the LED wave which is positioned axially above the three escalators arranged one after the other, consists of 60 LED strips. For the observer, due to the short distances between the LED modules the picture of a wave-shaped curved luminous sky is produced. This effect is supported by the mounting of the different elements placed slightly forward and with a steeper slope. Due to the parallelism in relation to the escalator surface produced in this way, the customers are captivated by the light wave with its fascinating colourfulness even before they step onto the escalator.

Each individual LED light dot in the strips can be controlled with regard to the colour rendition and luminous intensity, by digital means and hence quite exactly with colour control modules of the DigiLED series from Vossloh-Schwabe. Hence, the light as a whole can be changed as desired with regard to its running direction and speed and can in that way always create different effects again and again. The COB technology from Vossloh-Schwabe Optoelectronic ensures, in the case of the LED modules, homogeneous light distribution and rich, deep colours. On this basis, Ansorg has created and programmed nine light moods with different atmospheres which in their interplay produce breathtaking, dynamic scene setting. The well ‘timed’ and varying play of colours arouses positive emotions and stimulates the observer. In addition, the speed of the colour/light sequences can be controlled in such a way that the light overtakes the customers on the escalator, hurries on ahead of them or travels with them.

Carried along on the wave of light, the way to Esprit creates enthusiasm and makes everything really twice as enjoyable.

However, not only the sales-supporting effect of the novel LED lighting was important for ESPRIT. Equally significant were the ecological aspects. For instance, the LED equipment currently provides unparalleled energy efficiency. An LEDLine module from Vossloh-Schwabe installed at ESPRIT requires only just 4.8 W (at 200 mA and 24 V), in order to generate luminous power of 65 lm (beam angle of 170 degrees). Colour mixtures with LEDs are considered particularly cost and energy efficient, since in comparison with conventional lighting no filters and mechanical moving parts are required. Added to this is optimum thermal management of the LEDLine modules which permit an extremely long product life and freedom from maintenance. In that way, not only is there a considerable saving in electricity costs, but also the expenditure on the servicing and maintenance of the installed lighting equipment is significantly lower than in the case of conventional lighting. The LED installation at ESPRIT is thus a beacon for new attractive sales stimuli and sustainable energy and cost savings.

Explanation of the individual light scenes:

Coloured light moves in waves over a basic light in a different Colour:

Technical details of the LED design

Exactly 1,260 modules of the LEDLine 300 RGB modules were used in the biggest ESPRIT store with its 1,300 square metres. The dimensions of the modules are 300 x 10 mm. They are each fitted with 60 LEDs in RGB colours. Hence, 75,600 light dots at ESPRIT ensure the special lighting effects. The LED modules are made in chip-on-board-technology (COB technology). In this case, the LED chip is placed directly on a printed circuit board and contacted so that high insertion densities of up to 70 chips/cm² are reached. The result is: with the COB technology homogeneous light distribution is achieved.

The DigiLED control modules from Vossloh-Schwabe ensure the appropriate lighting effects with the colour values of the RGB LEDs being easy to select.

The LED housing made of translucent plexiglass protrudes from the aluminium profiled section of the lighting strip, as a result of which additional illumination is released laterally and the lighting effect is intensified.

Spanish Sun in the Heart of Paris 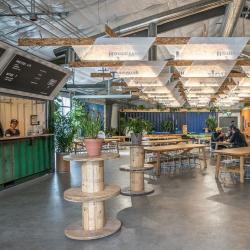 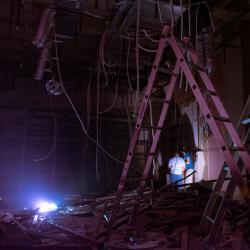