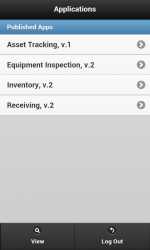 In addition, CaptureSoft eXpress for Android has been validated by Motorola Solutions and will be used as a demo application on the new TC55 touch computer.

Developed and supported by Barcoding’s Software Services division, CaptureSoft eXpress was released in 2008 for devices running a Windows Mobile OS, and has since been employed by thousands of users for rapid application development in fields including route accounting, fixed asset tracking, data entry, inventory management, and more. Now, with its release on Android, users have the flexibility to implement CaptureSoft eXpress on a traditional rugged (industrial grade) device or on any of the wide variety of devices that run Android.

“With the increasing adoption of the Android operating system in the enterprise, Barcoding recognized the need and opportunity to develop a version of our CaptureSoft eXpress software for this growing platform,” said Jack Nosek, Barcoding’s lead software developer and winner of the 2012 Motorola Solutions APPFORUM Code<A>Thon. “The Android-compatible CaptureSoft eXpress offers the same cutting-edge, rapid application creation capabilities as its Windows counterpart, allowing users to expand their data capture abilities to gain new efficiencies.”

Motorola Solutions is using CaptureSoft eXpress for Android to demonstrate the functionalities of its flagship Android device, the TC55. Released in October 2013 and beta-tested by Barcoding, the TC55 combines the features of a traditional enterprise-class mobile computer with the form factor and functionality of a smartphone running the Jelly Bean version of the Android OS. It is ideal for the field service, merchandising, and direct store delivery (DSD) markets.