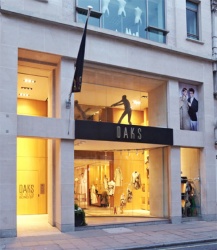 DAKS, one of Britain's major fashion companies, has implemented Idis DirectIP surveillance at its flagship stores on Old Bond Street and Jermyn Street in the heart of London. Idis partner and security systems integrators, Rutledge Integrated Systems (RIS), won the contract to install and maintain the Idis DirectIP solution through a competitive bid situation.

Previously using an aging analogue CCTV system, DAKS faced an increasing level of theft, with the legacy system providing inadequate views of shop floors, coupled to poor clarity of image and slow retrieval of footage. DAKS selected the RIS and Idis solution based on performance and affordability combined with RIS’s security expertise and experience in high-end retail environments.

The unobtrusive flat dome cameras and the sleek design of DirectIP NVRs are conducive to the high-end retail experience offered by the DAKS luxury label. With Royal Warrants granted from three members of the Royal Family, DAKS values the quality, reliability and innovation that the DirectIP solution encompasses, allowing the fashion company’s brand identity to flow through to its security operations.

Commenting on the solution, Ray Price, Head of Maintenance at DAKS, said, “The DirectIP solution offered us the complete 360° surveillance capability we were looking for. Continually impressed with its outstanding HD resolution and clarity, our staff have quickly adapted to the solution using its simple and intuitive interface. The RIS and Idis solution offered us a fast return-on-investment through a reduction in theft, while the elimination of annual video management license fees ensures a low cost of ownership.”

Andy Rutledge, Managing Director, RIS, said, “DirectIP provided the performance and affordability DAKS demanded allowing us to offer a compelling and competitive solution. DirectIP is an especially good fit for the retail sector, featuring 30 images per second to deliver real-time full-HD across multiple cameras with next to no network latency. This enables DAKS staff to quickly and accurately detect any suspicious behaviour.”

Lewis Hayzelden, Operations Manager, RIS, added, “DirectIP facilitated a simple and rapid out-of-hours installation without disrupting a busy retail environment. Using true plug-and-play simplicity, we implemented the solution and trained DAKS staff at each of the stores in under eight hours.”