Fashion retailer has surveillance all sewn up 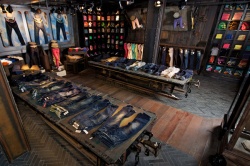 SuperGroup is an internationally recognised, UK-based fashion retailer. Its merchandise is sold in approximately 100 countries throughout the world, comprising 105 UK and Continental European standalone retail stores, 71 UK and 56 international concessions, and 143 franchised and licenced stores. The group is known for its strong attention to detail, both in the production of the merchandise and in the layout and aesthetic of its stores.

When looking for a new surveillance set-up, the priority was inconspicuous cameras with HDTV image quality video. When tested against other leading manufacturers’ products, Axis cameras proved to be the most adaptable to SuperGroup’s challenging store environment. Darren Conway, health and safety and loss prevention manager at SuperGroup, explained: “We have a very specific aesthetic in all our stores, characterised by dynamic, low-level lighting, reflective surfaces and LED signs; we’ve found that a lot of cameras lose image detail in these conditions.”

In response, Axis installed a variety of Wide-Range Dynamic Capture cameras to ensure identification quality images were being captured – even on the brightest of days. Darren continued: “With the old system, we had to flood the stores with around 30 analogue cameras. In such a confined space, they really detracted from the look of the store fit-out and we were still experiencing an unacceptable number of blind spots. With Axis, we’ve reduced the camera count to between six and 12 cameras, which cover the entire store in perfect HDTV quality.”

Working in partnership to deliver the best results

One of SuperGroup’s key requirements was to improve image quality of surveillance coverage at each till point whist not increasing camera numbers. To achieve this, Axis’ unique Corridor Format display was used to switch the aspect ratio of the video footage from a 16:9 to a 9:16 ratio, allowing SuperGroup to maximise its view area.

Working closely with partners, Wavestore, which provided the video management software for the project and NEDAP, the manufacturer of the store’s electronic article surveillance (EAS) system, Axis was able to bring the different aspects of physical security within the store onto one unified platform.

Further integrations between Axis and Wavestore are also being trialled in SuperGroup’s UK stores, where a solution has been devised to automatically notify nearby staff when a customer enters the fitting room area. As well as encouraging better customer service, these smart analytics help to heighten security in a high-risk area.

When combined with other business intelligence functions, progressive integrations between the SuperGroup’s surveillance and physical security systems ensure an increased return on investment, and benefits beyond straightforward loss prevention. Darren said: “We’ve been very impressed with the system so far and are about to trial some more advanced functionality when we install the system into our next new store opening. Whenever we’ve presented Axis and Wavestore with a problem, they’ve come back with an almost immediate solution. At every stage of the installation, Axis’ support and customer service has been second to none."