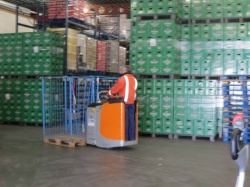 Zetes is helping the liquor chain store Dirck III to pick orders faster and more accurately. With the help of ZetesMedea Voice, Dirck III's distribution centre in Zundert has achieved a productivity increase of at least 20 packages an hour. At the same time, the frequency of errors has been reduced and 99.5% of orders are now correctly picked.

ZetesMedea is a logistics solution that efficiently directs all warehouse processes. The underlying aim for companies deploying ZetesMedea is to complete logistics processes more quickly and flexibly, prevent mistakes, and reduce costs. The module ZetesMedea Voice concentrates on the use of speech processing technology for operations, including order picking in the warehouse. It uses the MCL Voice platform and offers a next generation, speaker-independent approach to speech recognition. Dirck III has integrated ZetesMedea Voice into its SAP ERP system.

Until September 2013, employees at Dirck III's distribution centre still collected orders using A4 lists with package stickers. As a result of stickers becoming creased, peeling off, or getting stuck in the wrong places, unnecessary mistakes occurred when deliveries were sent to shops.

DC manager Jan van der Nagel explains: “Early in 2013, we considered the advantages of voice picking and concluded that it could improve distribution centre productivity by 6 to 7%. Furthermore we could reduce the number of mistakes, which is vitally important for client satisfaction. We opted for ZetesMedea Voice because it is a speaker-independent system and was recommended by A.S. Watson Health & Beauty Benelux (trading as Kruidvat, Trekpleister, and ICI PARIS XL). Using a speaker-independent system saves precious time, which, with traditional voice systems, is spent on training, registration, and the configuration of user profiles.”

At Dirck III, ZetesMedea Voice sends all order pickers on the shortest possible route to warehouse locations, where they receive assignments via their headset to collect the required number of packages. Once all the products for a single order are collected, the picker is informed that the assignment is complete and the order is given a unique order, branch, and journey number. ZetesMedea automatically arranges for orders to be processed on the basis of priority instead of personal stacking preference, and switching between slow and fast moving sections becomes unnecessary.

Mr van der Nagel continues, “Thanks to this technology,order picking is now 99.5% correct and employees are enjoying hands-free working much more. Our previous average picking speed of 160 packages an hour has risen to at least 180, whilst for large orders with several packages of the same article, we're able to achieve up to 225 packages an hour and, for special promotion actions, over 300 packages an hour.”