Petty theft, shoplifting and theft by employees are on the rise 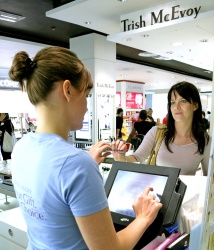 The BSIA's survey showed that shoplifting and petty theft were perceived by security providers to be the biggest threat to retail security.
Source: British Security Industry Association

Research undertaken by security trade body the British Security Industry Association (BSIA), has revealed an increase in demand for security from the retail sector over the past 12 months, with petty theft, shoplifting and theft by employees the biggest cause of this rise.

The survey, which aimed to identify trends in retail security over the past year, was completed by members from across all sections of BSIA membership, with those focused on security guarding and the manufacture and installation of intruder alarms and staff protection technology showing particularly significant levels of experience in providing security solutions for retailers.

65% are expecting a further increase in demand

Over 85% of respondents claimed that the use of private security measures in retail has either remained static or increased over the past 12 months, with 65% also expecting a further increase as we move into 2013. Despite recent reports highlighting the rocketing cost to retailers of online crime, the BSIA's survey showed that shoplifting and petty theft were perceived by security providers to be the biggest threat to retail security, closely followed by so-called 'inside jobs' - that is, theft by retail employees, which was highlighted as a threat by 20% of respondents.

Electronic security solutions are proving particularly popular in the fight against retail crime, as three BSIA member companies can testify. One company that's seen a particular increase in demand for its services is London-based Wavestore Ltd. Chris Williams, Wavestore's Marketing Director, comments: "For more than 12 months we have seen an increase in demand for advanced security solutions to address the increase in losses due to theft and fraud."

Retailers are turning to intelligent surveillance

In Wavestore's experience, retailers are combating this threat by turning to a range of technological solutions, including intelligent panoramic CCTV cameras that automatically track objects and people, recording systems that instantly transmit a video clip of an event to security staff when an alarm is triggered, and biometric facial recognition technology.

"Panoramic CCTV cameras are quite different to fixed cameras or PTZ cameras that can only view a defined field of view," says Chris Williams. "Shoplifters cannot tell what the camera is recording - in fact it is recording the whole scene. We are installing these solutions into nationwide store chains in Europe and the USA."

The economic downturn has been identified by many respondents as one of the possible causes for the increase in this type of crime, and retailers continue to invest in security measures as a result.

Like Wavestore, King's Security Systems has also seen an increased demand for new technology, which Anthony attributes to a change in approach and mindset about new solutions.

He adds: "With the new cloud-based CCTV hosting solutions that are coming through, the days of the conventional DVR are numbered, as centrally hosted CCTV recording gives Loss Prevention Managers and their colleagues in Marketing visual store access at the click of button from anywhere in the world from a laptop PDA or smart phone."

Aside from the more traditional alarm and CCTV solutions, newer technology such as lone worker protection devices is also becoming increasingly popular in a retail setting. Equipped with mobile phone technology, such devices connect employees quickly and discreetly with an emergency response system that has direct links to the police.

Craig Swallow, Managing Director of lone worker device manufacturer, Connexion2, believes that this increased demand is the result of a changing retail environment. He comments: "So-called 'single staffing', where retail employees are required to work alone, is a popular way for retailers to cut costs in a challenging economic climate. However, working alone exposes employees to an increased risk from robbery or violence, particularly now that retail outlets are open for longer hours and staff take on additional tasks that take them away from the point of sale.

Craig continues: "Not only do lone worker devices provide retail employees with peace of mind and added protection, but they can also help retailers to mitigate business risk and minimise both the reputational and financial impact of crime as a result."

James Kelly, Chief Executive of the BSIA, concludes: "As round-the-clock retail becomes more commonplace, the sector is clearly adapting quickly to the fresh security challenges that such an operation brings. By adopting an open-minded and innovative approach to security technology, retailers can reduce their risks and respond faster when crime does occur."

Security in retail has a name: EuroCIS 2015

40 Years of Security Essen: Premier Global Fair Showed Itself on Its Best Form in 2014