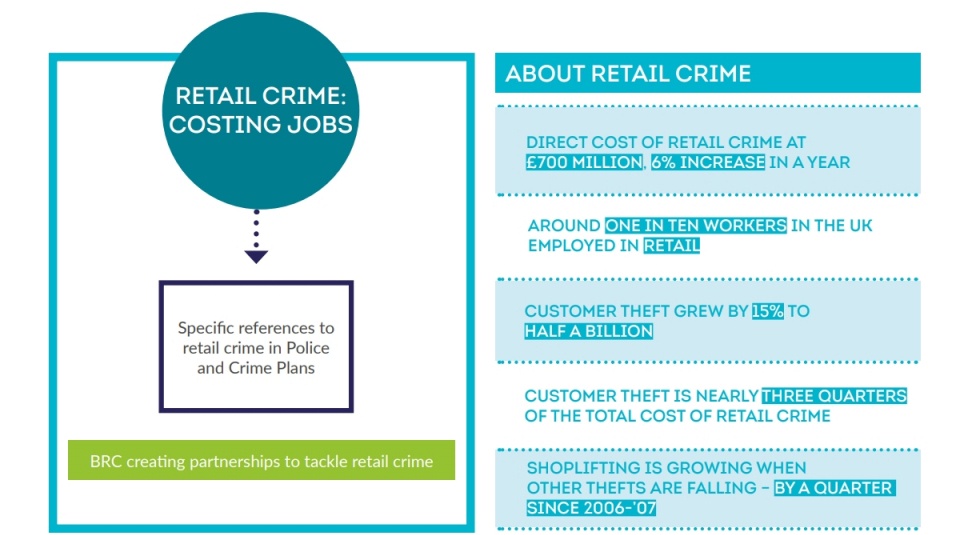 Part of the survey
Source: BRC

The British Retail Consortium’s (BRC) annual Retail Crime Survey reveals a concerning spike in violence against staff causing injury, with the number of incidents happening at twice the rate of last year’s survey, the previous record.

Overall, this year’s survey presents a mixed picture. There have been noticeable improvements in some areas, such as fraud, where the cost to retailers has fallen by nearly £30 million, as a result of their significant investment in prevention.

Despite that spending, the total direct financial cost of retail crime has climbed to £700 million- an increase of six per cent from the previous year. ‘Customer theft’ remains the largest element, now over £half a billion per year, a 15 per cent increase on the previous results.

The biggest concern comes from the growth in severe violent incidents against staff. BRC members report that career criminals intentionally use violence and abuse when challenged over stealing. The increasingly common requirements for retail colleagues to age-check and refuse sales, is also triggering increasing violence and threats.

The rate of these incidents of violence with injury has doubled since the previous year to six per 1000 members of staff.

Commenting on the findings, Helen Dickinson OBE, Chief Executive of the BRC said: “Retail directly employs nearly one in every 10 workers in the UK, and millions more indirectly. Retail already faces its own challenges, with margins shrinking, and against that backdrop the pressures that retail crime exerts are having a stronger impact. That is why we are working to build a new model for co-operation around tackling retail crime, and encourage decision-makers throughout the country to apply the priority these issues deserve.

“In particular, the figures on violence present a deeply concerning picture. Attacks on retail workers are intolerable, and our members are completely clear that keeping their staff safe and providing an environment in which they can work free of fear from threats and violence, is their first priority. Retailers are doing everything possible to ensure that staff members and customers are safe and protected. But they are now spending record amounts on crime prevention, which is a drag on the economic viability of shops and not infinitely sustainable. A new approach is required. Working with our key partners, we at the BRC are seeking to deliver an agreed strategy to halt violence and abuse in its tracks.”

Climate protection is more than an environmental issue

Some glitter but no gold for Christmas

In December, UK retail sales increased by 0.6 percent on a like-for-like basis from December 2016

Retail industry employment increased by an unusually high 12,900 jobs in November over October