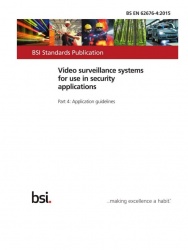 The standard which saw input from the Home Office, the Metropolitan Police and Transport for London, provides guidance on how to ensure that video surveillance systems (VSS), which are referred to as closed circuit television (CCTV), meet their functional and performance requirements.

VSS is a means of providing images from security cameras and recorders for viewing on a display via a transmission system. There is no theoretical limit to the number of cameras and displays which may be used in a VSS installation but in practice will be limited by the efficient combination of control and display equipment, and the operator's ability to manage the system. The successful operation of a VSS requires the active co-operation of the user in carrying out recommended procedures.

The aim is to achieve worldwide interoperability for CCTV, and as such the BS EN 62676 series of standards for video surveillance systems for use in security applications, are the joint European/international adoptions of the BS EN 50132 series. This recent revision has an added national annex for security grading application for video surveillance systems providing a shorthand way to simplify the specification of system requirements.

Anne Hayes, Head of Market Development for Governance at BSI said: “The Surveillance Camera Commissioner has already endorsed the use of this suite of CCTV standards for systems that need to follow the Surveillance Camera Code of Practice. This type of unity can only provide the best reassurance and peace of mind for the public, who rely on  video surveillance systems to be operating optimally, to ensure their safety.”