”We work on considerably improving the image“ 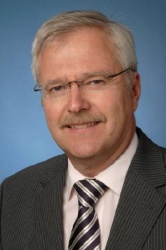 Security service requires trained associates. They are not available for minimum wage however and their skills have to be improved, says Dr. Harald Olschok. Since 1992, he is the Chief Executive Officer of the German Federal Association of the Security Industry (BDSW) and the German Confederation of Security Systems for the Transport of Money and Valuables (BDGW). Olschok explains how to find good service providers and what detectives or doormen are allowed to do.

How is the security industry developing?

Last year, the security industry in Germany, which consists of mechanical and electronic security solutions, generated revenues of almost 11 billion Euros. We assume that the increases will also be above average over the next few years. This particularly pertains to event security services and critical protection of infrastructures and transportation routes.
Currently important topics are the protection of public places, transport safety, property surveillance as well as the security of buildings and equipment. System solutions are in increasing demand. The strong presence in smartphone-capable developments is also remarkable. At this point, cameras and alarm systems can by controlled by cell phones. Camera technology has also greatly advanced.

What should the retail market do to ensure more security?

Several weeks ago, the EHI Retail Institute pointed out that merchandise valued at more than 6 million Euros disappears daily in German retail. This adds up to annual inventory differences of almost 4 billion Euros of which approximately 1.9 billion are attributed to dishonest customers, and 800 million to a company’s own employees. This demonstrates the security challenges in retail. Retail already invests around 1.2 billion Euros in preventative and safeguarding measures to protect its merchandise from theft. In the future, it will be more crucial than ever to improve retail security systems, to implement video surveillance and employ qualified retail safety specialists as well as train employees to be more alert.

How do you rate the qualifications of retail security guards?

We teamed up with the Metro Group and the EHI Retail Institute to sustainably improve the qualifications of retail security personnel. Along with the retail market, we are dissatisfied with the current qualifications of many store detectives or doormen. We recommend specific additional education based on a two-year training to become a safety and protection specialist. This additional qualification particularly includes retail-specific topics such as criminal types, procedures in the event of theft, anti-theft technology, interrogation techniques and collaboration with the authorities. We estimate that there are currently around 15,000 store detectives and doormen on duty. Together with EHI and Metro, we estimate a short-term qualification gap of approximately 3,000 retail security officers.

What qualifications do doormen need to have?

According to the German Trade, Commerce and Industry Regulation Act, since 2002 a doorman requires a so-called professional competence assessment by the German Chamber of Commerce. Simple training according to § 34a of the Act is no longer sufficient. The competence assessment has to prove that the doorman has gained the knowledge on the required legal regulations and specific technical responsibilities and authorities as well as the practical application of this occupation. The objective is a responsible adherence to his/her security assignment. Legal foundations alone are no longer enough.

What rights does a doorman have?

Unlike the classic store detective, you can recognize a doorman by his/her uniform. As it pertains to third parties, he only has the rights that everyone else is entitled to in case of self-defense, an emergency or self-help. The principle of necessity has to be strictly adhered to. When a customer triggers the alarm, it is the doorman’s job to check whether the customer merely forgot to have the security tag removed at the checkout or whether this is stolen merchandise. If the addressed person wants to escape or doesn’t want to provide his/her personal data, the doorman is allowed to temporarily detain the person according to § 127 of the German Code of Criminal Procedure until the police arrives. The job of a doorman primarily consists of discouraging potential shoplifters. The uniform signals this preventive effect for all to see. In addition, the doorman also has a service duty towards the customer. He exercises the rights and responsibilities of a retailer.

The security industry has had minimum wage requirements for about one and a half years. Has this regulation paid off?

On June 1, 2011 minimum wage was introduced for security services under the protection of the German Employee Assignment Agreement. The introduction of minimum wage requirements has had no negative impact on the employment situation in the industry sector. On January 1, 2013, the minimum wage for security services will increase to 7.50 Euros basic hourly pay in 12 German states. Significantly, higher minimum wages apply in parts in Hessia, North Rhine-Westphalia, Bavaria and Baden-Württemberg.

A qualified security service – this also includes being on duty in retail – requires trained employees. They are not available if you only pay minimum wage. That is why we have agreed upon hourly wages in several German states for doormen and store detectives that are above the minimum wage. The demographic development will result in a clear increase in wages in the security industry.

We are also working on considerably improving the image. The security industry is an exciting, dynamic and highly innovative industry sector. As security service providers, we are “all-rounders” whose job is to minimize risks for the nation, the economy and society. This increasingly also applies to retail.

How do you find an excellent security service provider? What certifications are important?

Over the past ten years and in collaboration with the BDSW, our member companies have launched a downright attack on improving qualifications. There is a two and three-year formal occupational training as well as a regulation for career changers. You can obtain a Bachelor’s degree in security management at four policy academies. At the Berlin University for Professional Studies, you can even obtain a Master’s degree.

Every customer of course is asked to find his/her qualified security service provider out of the almost 4,000 security companies in Germany. The 800 BDSW member companies are particularly qualified security companies. Today, a quality management system according to DIN ISO 9001 is the norm. Another good foundation to separate the wheat from the chaff is DIN 77200 on requirements for security services, which was introduced ten years ago. Before awarding any contract, we recommend developing a safety concept. The mere presence of a doorman is not enough of course. Intelligent cross-linking of safety technology and security services guarantees the fullest amount of security.

Airport security has caused tongues to wag in Germany with the Berlin Airport. Are safety concepts too complex?

Planning a new major airport is among the biggest challenges imaginable in this industry sector. The security and safety requirements have vastly increased over the past years. After the Düsseldorf airport fire a few years ago, the requirements in preventive fire protection have been significantly increased.

In the security area, government guidelines also increase almost annually. Aside from national regulations, the significance of the EU is steadily growing. As is well known, for several years now you can only take liquid containers up to 100 ml onboard a flight. Last year the EU announced to do away with this limitation and to stipulate the use of so-called “liquid scanners” to control airports. Shortly before the scheduled introduction, it was postponed again. This results in tremendous challenges for new airport planners. That said the challenges while building a new commercial airport cannot be compared with building a logistics center or new shopping center.