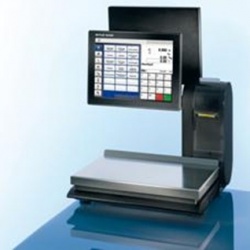 Clear and easy to operate: The high-resolution, vivid full-colour touchscreen with LED backlight technology on the operator display of the UC Evo Line.

Whether used in specialist stores or by major supermarkets at their fresh-food counters and in the self-service areas, METTLER TOLEDO’s UC Line of PC-based retail scales is one of the most successful touchscreen scales available today. Its new UC Evo Line, which will be presented for the first time at EuroShop, marks the follow-up model to the METTLER TOLEDO UC3 Line.

Standard: Brilliant LED backlight technology
Take what is already good and make it even better – that was the brief given to the engineers and designers who created the new range of models. All UC Evo Line scales are fitted as standard with vivid full-colour, high-resolution customer and operator displays with LED backlight technology. The high-performance display screens have contrast values of around 17 per cent higher than their predecessors, thus guaranteeing further improved legibility even under very difficult lighting conditions. The particularly slim-line housing around the screens looks elegant and stylish, and just like the casing it has no openings to harbour dirt.

New: Flexible Scale Display System (FSDS)
One of the key innovations of the UC Evo Line is the completely newly developed Flexible Scale Display System (FSDS). The FSDS mechanism allows the retailer to adjust both the angle of tilt and the height positioning of the customer display to suit the specific situation at the sales counter. This helps to avoid having objects unnecessarily blocking the view between the sales assistant and the shopper, while ensuring that price, weight and item details are particularly easy for customers to see by enabling the screen to be set at consumer eye-level. “Moreover, retailers notice an extra benefit of the flexibility offered by the FSDS when they use the scales for visual merchandising at their fresh-food counters,” explains Julia Obstfelder, METTLER TOLEDO Head of Retail Marketing Region Central Europe. “Since the customer display can be positioned to suit the specific situation at each counter, any promotional campaign displayed on the screen will have maximum impact and hence drive impulse buys.”
Thanks to the FSDS mechanism, retailers who have a combination of scales at their fresh counters – some with and some without cash drawers – can easily adjust the levels of their customer displays, thus eliminating height differences and ensuring that the overall appearance of the counter is as attractive as possible. And the FSDS mechanism offers an extra ergonomic benefit for employees: the angle of tilt of the scale’s touchscreen can be altered too, which helps to eliminate the physical strain of repeated operation, thus speeding up service and reducing the risk of errors.

More sustainability at the fresh counter
Robust, durable and hard-wearing: the UC Evo Line casings are made from sturdy die-cast aluminium – making them environmentally friendly and recyclable too. Thanks to energy-saving Intel Atom processors, a high-speed DDR2 memory, fanless cooling via the casing and intelligent standby modes, this new range of models provides retailers with even better performance combined with lower energy costs.

Tailor-made performance
The latest models of scales are initially available in three targeted categories. Furthermore, the launch of the UC Evo Line marks METTLER TOLEDO’s introduction of new designs – such as a compact scale with a large customer display.
With its UC Evo Star Line range of models, METTLER TOLEDO is targeting small and medium-sized food retailers who expect rapid weighing and service, combined with the comfort and convenience of a touchscreen.
Meanwhile, the UC Evo Max Line is aimed at retailers with an extensive fresh assortment as well as those who intend to make full use of the visual merchandising possibilities – such as by running promotional multi-media campaigns at the point of sale – which makes it the first choice for grocery chains.
Meanwhile, retailers who require the highest METTLER TOLEDO performance levels from their scales combined with maximum freedom to integrate them with their existing hardware and software architecture can opt for the UC Evo Max VCO Line. This range of scales provides the retailer with maximum openness in terms of interfaces and standards, enabling existing applications from third parties - such as POS-software for example - to be seamlessly integrated into the retail weighing solution.

The UC Evo Line supports the Windows POSReady operating system and can be optionally supplied with Linux.

Advertising, weighing, collecting – the future at the Point of Sale