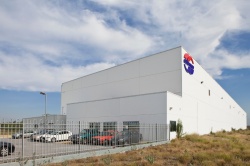 The Güntner company is known for being locally present. This continuous contact with the market allows us to follow the requirements of the different market segments and to implement these requirements in innovative products. In order to realise this expanded product portfolio, the production capacities have been expanded at several international locations.

The Güntner-Tata GmbH in Hungary, the globally largest manufacturing location of the Güntner Group, have enlarged their factory premises due to the sustainable increased demand and the expected growth in the future.

The Tata plant, situated approx. 60 km west of the Hungarian capital Budapest, is the most important European manufacturing location of Güntner. Here, the Güntner heat exchangers for all lines of business are manufactured in finoox® and microox® technology - from Commercial and Industrial Refrigeration to Air Conditioning to the large EPC units.

The previous area size of a bit more than 11 ha had become much too small since the foundation of Güntner-Tata GmbH in 1990; this concerned both the manufacturing facilities including the storage location and also the administration office. Last year, a property of over 2.5 ha next to ours was bought in addition.

The capacity increase of the production is meanwhile completed; the new production line was already opened in mid-February. Both the Manufacturing and Construction Dept. already moved into the new halls. Also the storage space was significantly increased and new offices and a canteen of 450 m2 were added to the Administration office space which became much too small. Furthermore, a visitor centre is being built that will not offer only an overview of the company's history, but also houses exhibition rooms for the manufactured series and has training and conference rooms.

Opening of the new production hall in Apodaca, Mexico

Güntner de México is located in Apodaca in the Mexican federal state Nuevo León and manufactures Güntner products for the Northern and Latin-American market. An expansion was necessary also here to be able to meet demand.

Since 1993, Güntner-Ish GmbH have existed in Izhevsk, Udmurtia. At this location, the company manufacture high-quality liquid receivers and shell and tube heat exchangers which comply with national and international standards such as TÜV and GOST R and can be ideally adapted to each customer requirement.

The excellent equipment enables us to manufacture containers with a volume of up to 30 m3, a wall thickness of 25 mm and up to approx. 3 m in diameter for the Russian market. Thus, the Güntner Group's wide range of products is expanded by another valuable product so that we can offer all refrigerant components to customers from one single source.

Air coolers – up to 80 bar as standard

Innovations in the area of commercial refrigeration